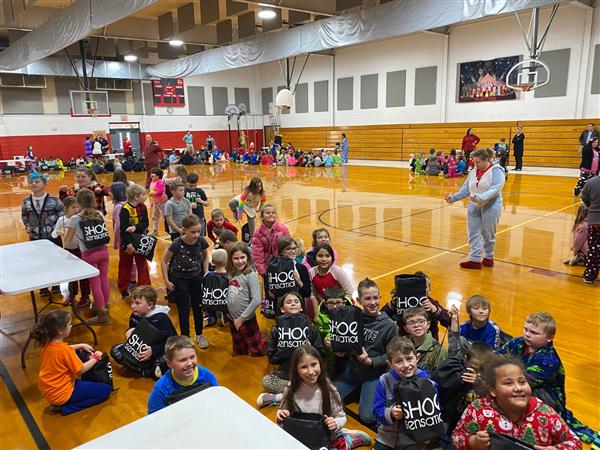 The Lelia Heuer Foundation, with the help of Shoe Sensation of West Plains, distributed 306 new athletic shoes and socks to all third and fourth-grade students at West Plains Elementary School. The $15,000 Heuer Foundation gift provided each student with a brand new pair of shoes and socks. The announcement was made during an assembly at the school Thursday, December 19, and personnel from Shoe Sensation in West Plains were on hand to make the surprise delivery. The students were recently fitted at the school by the store's employees.

"I cannot express enough thanks for the shoe donation for our students. We are honored to be chosen for such a terrific and fun donation.  We sincerely appreciate the support as we work together to help our students reach their highest potential," said Donnie Miller, West Plains Elementary Principal."

Lelia Heuer, the foundation's namesake, was born in West Plains, where her family owned a shoe store. She lived in West Plains and later in Lebanon. Since its inception in 1996, the Heuer Foundation has distributed over $1,300,000, primarily to nonprofit, tax-exempt organizations in Laclede and Howell Counties, Missouri. Approximately $281,000 has been distributed in the West Plains area. The Heuer Foundation grants are concentrated in several broad areas of need in education with an emphasis on health scholarships & broad national health issues.  Jerry Redfern, Springfield, is the foundation's chairman.