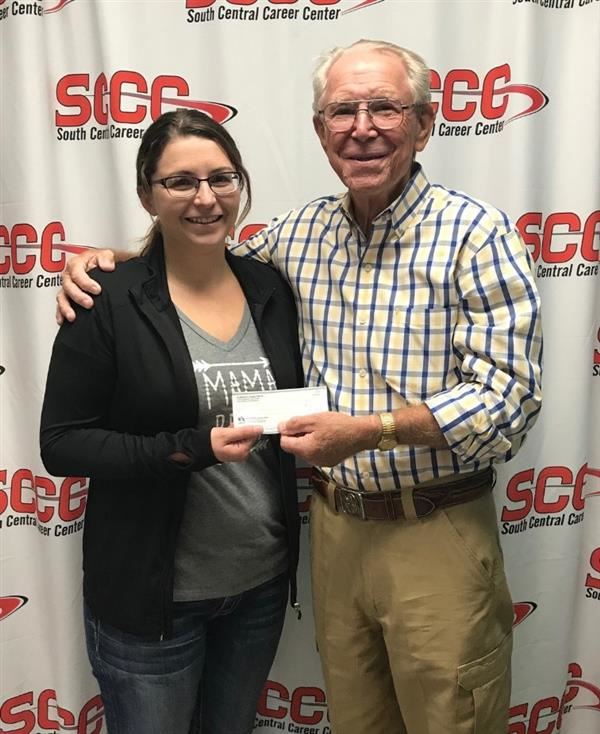 Following the establishment of the $100,000 Clarence “Butch” Shelton Class of 1965 Endowed Scholarship in 2018, a second recipient has been selected.  Mr. Shelton recently awarded Erika Painter a $2,000 scholarship to offset the cost of attending the South Central Career Center Practical Nursing program.

Painter said she wanted to be a nurse so that she could, “be a positive impact in people’s lives and have the ability to help them when they need it the most.”  Painter is in the 2019 class that will graduate in December.

Clarence “Butch” Shelton graduated from West Plains High School in 1965 and enlisted in the United States Army where he served for 31 years from the platoon level to his final assignment as the Deputy Commander of a Division Unit.  He is among those inducted into the U.S. Army’s Officer Candidate School Hall of Fame at Fort Benning, Georgia. He retired from the Army in 1997 after achieving the rank of Colonel.

After leaving active duty and joining the Army Reserves, Mr. Shelton began serving in another capacity—as an administrator for long-term care facilities.  He has served as Chief Operating Officer, Executive Vice President, and Division President for large, nationwide healthcare systems.  Butch has a bachelor’s degree in Business Administration from Southeast Missouri State University in Cape Girardeau and a master’s degree in Public Administration with an emphasis in Healthcare from the University of Alabama in Birmingham. Butch and his wife, Carolyn, now reside in Talladega, Alabama.

South Central Career Center is hosted by West Plains Schools and has served south central Missouri since 1970 with adult and secondary career and technical education programs and numerous other high school courses.  With a mission to develop a highly-qualified workforce, SCCC works with thirteen area high schools, participates in the federal financial aid program, and has close partnerships with regional industry.